Ellen Got It Right

We should be able to sit at a baseball game and enjoy a beer and a brat with a friend, even if that friend’s political beliefs aren’t exactly our cup of tea. It shouldn’t take an Ellen DeGeneres therapy session on decency to remind of us of that. But it did.

You see this is us. This is who we’ve become, and we better knock it off.  If we don’t, forget trying to live up to the standards of the Greatest Generation.  We will go down in history as the Stupidest Generation. And I don’t think that’s a legacy any of us want.

Over the past two weeks, I had the opportunity to play some golf with good friends, trying to chase that little white ball around on a beautiful fall day. And guess what?  I was surrounded by folks who voted for Donald Trump the first time, and may, and I want to stress “may,” vote for him again.  We don’t really talk politics. We try to make birdies.

Now one of the groups did pull out their Trump hats on the first hole just as I was getting ready to tee off. They have a weird sense of humor. It got the expected reaction much to their delight. That’s where our discussion of current events ended.

Given the guttural tendency of the current political climate, it is important to remember that we’ve always had a political fringe and political discord in the nation. But we always survive to come out stronger on the other side.

There is the original sin of slavery that still haunts us four hundred years later. We had a Civil War for crying out loud. 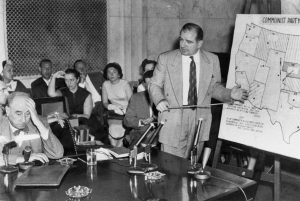 At the beginning of the McCarthy era, 32% of the American public agreed with Joe McCarthy that “commies” were hiding under every bed and if that meant destroying the lives of loyal Americans then so be it. The “base” in the 1950s had no trouble with a “witch hunt” even when the “witch hunt” was real and not just another unhinged tweet used to distract us from the real corruption taking place right before our very eyes. Thirty-two percent of the public continued to support McCarthy long after the Senator had been disgraced and even after Joseph Welch looked him directly in the eye to ask, “Have you no sense of decency sir?”  Yes, the fringe has always been with us.

On June 11, 1963, George Wallace stood in the doorway of Foster Auditorium at the University of Alabama to keep African American students James Hood and Vivian Malone from enrolling in college that day. The Governor of Alabama proudly proclaimed, “Segregation now, segregation tomorrow, segregation forever.” Five years later in the Presidential election of 1968, that same George Wallace would carry five states, garner more than 10 million votes, and amass 46 electoral votes. Yes, the fringe has always been with us.

During the Cold War era, the right–wing John Birch Society had more than 100,000 dues paying members.  And according to Politico, this group is making a comeback, no doubt inspired by hatred that is being spewed daily from the Oval Office. When a President mounts the podium at a rally to scream at the son of a former Vice President that his father is a loser whose only accomplishment was kissing the ass of President Barack Obama, we are in unchartered waters. Yes, the fringe is still with us.

An ugly, unseemly underbelly of the American experience has always been part of who we are, but it has never been fostered and encouraged by the occupant of 1600 Pennsylvania Avenue. Until now.

So in the midst of this gloom, why do I cling to my “cockeyed optimism?” It’s simple: I still believe in the decency of the American people.

In 2018, there was a major rebuke of Trumpism when Democrats won 41 congressional seats to take control of the House of Representatives.  Many of those seats were in suburban districts that Donald Trump had carried just two years before. Prior to those mid-term elections, a Gallup Poll found that voters identified a “dissatisfaction with government/poor leadership,” as more significant in determining their vote than even the economy, which always tops that list. I choose to translate that this way: decency still matters.

Or as New York Times columnist Frank Bruni opined when analyzing the results, “We aren’t what we own. We are what we disown, including the sexism, racism, jingoism and other ugliness to which Trump and his enablers merrily play midwife.” And assuming that Donald Trump is still President on November 3, 2020 (which is no longer a sure thing at this point in time,) it is why I believe he will be nothing more than an unfortunate footnote in American history books, and that rarest of breeds- a one-term President.

Those are the traditional battle lines between the two parties. That is the stuff of democracy. We can and should have those debates.

But we do not disagree on decency. And we don’t disagree on loyalty. That’s why we saw the “5th Avenue” argument start to melt away this week when the President abandoned our Kurdish allies in Syria. The American public might like tough talk, they might think Washington is broken, and they might like Gorsuch and Kavanaugh. But they don’t like throwing friends over a cliff.

They didn’t do that on the playground growing up, and they didn’t like it when the President did it this week. Turning his back on those who lost more than 10,000 loved ones battling ISIS on our behalf is not hard to understand. The American people get it, and they know that it is wrong. They know this in the same way that they know an American President is not supposed to ask the leader of a foreign country to help destroy his political opponent. These questions of right and wrong are just not all that complicated. Heck Sister John Brebuff made that kind of stuff pretty clear in first grade.

So with roughly thirteen months left until the Presidential election in 2020, I believe we will learn something very important and reassuring about our friends and neighbors on that November day: voters across the nation will reject chaos, reject ugly, reject vulgarity, reject racism, and they will reject division.

There’s that cockeyed optimism again. Thank you Nellie Forbush: “I could say life is just a bowl of Jell-O and appear more intelligent and smart. But I’m stuck like a dope with a thing called hope. And I can’t get it out of my heart.”

In 1992, James Carville famously proclaimed, “It’s the economy stupid.” This time, I suggest my friends on the democratic side of the aisle go with, “It’s about decency stupid.”