It’s Simple: We Just Have Too Many Guns

“Oh my god, there’s been another one.”

That is how the conversation began at our annual family Labor Day gathering over the weekend along the Chesapeake Bay in Cambridge, Maryland. Sadly, no one had to ask what “another one” meant. In America 2019 everyone knew that somewhere, somehow there had been another mass shooting in the United States.  Seven dead. 22 wounded. Weapon of choice: an AR-15 assault rifle. This time it was Odessa, Texas.

This summer: 58 dead. This year alone: 38 mass shootings. This is a national emergency.

There Are Just Too Many Guns

The bad news? The statistics are sobering: 40,000 people are killed by guns every year in the United States of America. There are more than 300 million firearms on our streets, and just 3% own 133 million of those guns. More than half of that group are “super owners” who average 17 weapons each. There are 120.5 guns for every 100 citizens. According to the American Journal of Medicine, citizens in the United States are ten times more likely to die by gun violence than a citizen in 26 other nations it surveyed. There is an armed military force roaming our streets, but it is not there to protect us.

The good news?  Only 31% of Americans own guns. Two-thirds of the citizens in our nation live in a gun-free home. In the 1970s, more than half of the people in the country reported having a gun in their home. The trend in clear, but we cannot wait for several more decades or tolerate incremental change. The crisis is now.

The Public Gets It: The NRA and Its Minions Don’t

weapons. That number included 55% of Republicans who were comfortable with such a ban, while 91% support requiring background checks for all gun sales. So the American people don’t think you should be able to buy an assault rifle out of the back of a pickup truck in the parking lot of a gun show. Shocker!

The survivors of the Parkland shooting recently released a straightforward, common sense proposal to change the downward spiral that engulfs our nation.  Their plan bans assault-style weapons, raises the minimum age for buying firearms, creates a national gun registry and requires gun owners to pay for new licenses each year. I have to register my car. It hardly seems like a radical idea to register a lethal weapon. Adding their proposals to universal background checks and red-flag laws should be the minimum that we demand. And while we are at it, a discussion about a mandatory buyback program for assault weapons merits more discussion as well. 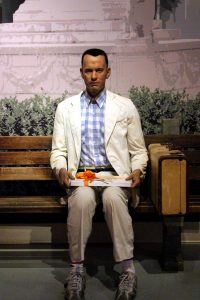 I do my best to avoid loaded vocabulary like “stupid.” I like to think there are better ways to express ourselves and bring everyone together, but sometimes it is the only word that makes sense to capture the outrage. As Forrest Gump said at that bus stop, “Stupid is as stupid does.”

So when those few who still have their heads stuck in the sand say we already have background checks, look them in the eye and say, “The current system is a joke.”  When they say that the strictest laws possible won’t keep every bad person from getting a gun, shake your head and say, “Seat belts and air bags don’t prevent every auto fatality either, so what’s your point?”  And when they say it is really a mental health and video game issue, try to keep your head from exploding and respond, “That’s an insult to everyone struggling with mental illness and on top of that I didn’t realize they don’t have mental health issues and violent video games in other countries.” When they say it is really hard to define what an assault weapon is say, “Give me twenty minutes and I’ll give you a list.” Just reject the stupid.

It is time to be vigilant. The public must stand up, and it must speak out. We can’t be fooled by the NRA team trying to distract us with small changes like red flag laws and minimal tweaks to background checks. If they do that, they will claim victory, toast themselves with a shot of bourbon, Wayne LaPierre will buy another thousand dollar suit, and of course the killings will continue.

The time is now- right now- to change the course of a nation, and here is how we do it: Get the guns off the street. Period.