So, let’s start today’s episode of “What the hell just happened,” with Uncle Bobby. Who’s that you say? I promise that if you stick with it until the end, it just might make some sense. But first, a little background on my uncle: 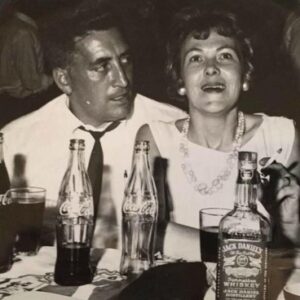 Robert P. Scruggs grew up on Route 175 in Jessup, Maryland. He had forearms the size of tree trunks, and although he didn’t have a college degree, was one of the smartest people I ever met. As a young man, he tended bar, worked in a liquor store, served as a volunteer firefighter, and finally found his passion as a proud member of the Maryland State Police.  By all accounts he was an exemplary trooper, and I have no doubt that had he remained in law enforcement, he would have risen rapidly through the ranks. But as a young man with a growing family, a trooper’s salary in the 1960s just didn’t cut it. (Sad commentary in itself don’t you think?)

When the opportunity came to purchase the local Exxon gas station just up the street from his home, he couldn’t resist. He worked that station from morning to night until the day he died. The office at Bob’s Exxon wasn’t just an “office,” it was where everyone came to get the morning news. Think Floyd’s Barbershop in Mayberry, RFD and you get the idea.

In addition to pumping gas, fixing faulty mufflers, and getting his hands dirty by doing oil changes, he was also the family bank (thank goodness for me). On more than one occasion as a young married couple, Linda and I would be short on funds as the month drew to a close, but I knew just what to do. I’d stop by the station to say, “Can you do me a favor and cash this check?”  Of course he did. And as I walked out cash in hand, I would typically mutter, “Would you mind holding that until next week?” He would smile, turn to his morning compadres, and say, “And he’s just one of my nephews.” He drank “Jack and

coke,” lived within walking distance of three prisons, went to the little Methodist Church every Sunday, and looked like he should be hanging out with Frank, Sammy, and Dean after hours in Vegas. He could easily have been a member of the “Rat Pack.” Oh, and he bought Christmas gifts for the children of customers who could not afford to do so, making sure that Santa would come this year.

We will get back to my uncle in a little while, but in the meantime there are many narratives to explore regarding what just transpired on election day. For the sake of brevity, let’s highlight just a few.

The media got bamboozled, and they can’t let it happen again. For weeks polling averages showed Republicans pulling away in key races all across the country. New Hampshire would be close. Patty Murray may go down. Look out in Colorado. Fetterman was toast, and Michigan’s Gretchen Whitmer and all her Democratic pals were on life support. Democrats, yours truly included, pulled the covers over their heads and curled up in a fetal position. Well guess what? None of those elections was even close. Democrats won handily, and we all exhaled. As it turns out, the polling averages had been skewed by a number of Republican-leaning polling firms whose methodology was shaky at best, and that’s being kind. Moving forward, Real Clear Politics and the other groups that aggregate data must have a standard to evaluate which polls are legitimate and which are not. Might a well trusted polling firm still occasionally swing and miss? Of course. But let’s do our best to make sure that polls use legitimate samples and are not designed to intentionally mislead the public. It might be a good idea to call Professor Mileah Kromer at Goucher College for some advice.

Young voters and women showed up, and democracy mattered. This was supposed to be the same old, same old for Democrats relying on the young vote. “They will vote this time,” we always say. And just like that, they never do. But guess what? This time they did. Exit polls put young voter turnout at about 27%, which would be the second largest turnout in three decades. In a number of the battleground states, turnout topped 30%. So here is the good news for the donkey and the bad news for the elephant: voters 18-29 years old favored Democrats by a margin of 62% to 36%, by far the most solidly Democratic block in the nation. The Center for Information and Research on Civic Learning and Engagement reports that “89% of Black youth and 68% of Latino youth voted for a Democratic U.S. House candidate.” Now why does this matter? Years ago, a seasoned political operative told me that if he could get first time voters to vote for his party in their first two elections, he had them for years to come. My gut tells me that he was right then and is right today.

While inflation is still an issue and presents families with real challenges, when faced with what would actually make people cast a vote, it appears as if taking away a woman’s right to choose, suburban moms worried about school shootings, and a slow drift to fascism actually had more to do with stopping a red tsunami in its tracks than anything else. Voters in five states this past Tuesday were presented with issues on the ballot directly tied to protect women’s reproductive health—Michigan, California, Vermont, Kentucky, and Montana.  Voters protected a women’s right to choose in each of those states, yes, even in Kentucky and Montana. As we’ve discussed before, Kansas was indeed the “canary in the coal mine.”

And don’t forget chaos and exhaustion. They are real, and it mattered.

While it may be comforting to think that finally, after six long years, the country may be ready to relegate the Ex-Celebrity President to the “Fat Elvis Lounge” on the strip, I would say, not so fast. In 1964, Lyndon Johnson won the presidential election in a historic landslide. His

opponent, the father of modern conservatism, Arizona Senator Barry Goldwater, had voted against the 1964 Civil Rights Act and opposed Social Security. He still got 38.5% of the vote. Those folks and their children and grandchildren are still here, and they are not going to change their long-held beliefs any time soon.

While the Republican Party may indeed be facing an existential crisis, the base still rules the day with the rank and file. Their passion and fealty led them to run a large number of candidates outside of the mainstream and likely cost them the traditional victory expected in off-year elections in a President’s first term.

While this may be the beginning of a move toward sanity, it is not likely to happen in the near future. The Donald is not about to exit stage right. In 2016, he won primary after primary with 25-35% of the vote, swatting away traditional “small c” conservatives as if they were bugs against his windshield. Republicans prefer “winner take all” primaries. You can win just 30% of the vote, but you walk away with 100% of the presidential delegates. That structure gave us a man who famously said that if he shot someone in the middle of 5th Avenue, his people would still be with him. My guess is that regardless of the current love affair with Ron DeSantis, he is still right about that.

We still need to focus on gerrymandering and vote counting, but we will leave those little gems for next time.

But for the moment, let’s focus on the positive: the 2022 mid-term election will be forever known as the time decency won. And that brings us back to Uncle Bobby.

My uncle had terrific people radar. He could spot a phony a mile away. And he didn’t like liars. Despite the fact that politics was always discussed at our dinner table, for some reason I have no idea whether he was a Democrat or a Republican.  That probably says a lot about him. When he liked someone, he would often say, “You know they’re just good people.” He liked good people. If he were alive today, he would vote for “good people.” I’m confident that he would reject insanity. Millions of Americans did the same on Tuesday, and our democracy is better off because they did. Uncle Bobby for the win.