They Didn’t Learn a Thing

They Didn’t Learn a Thing

As a little boy, my family’s small apartment on Garden Ridge Road would be filled with excitement and wonder when Rhea and JP (WBAL’s weather gurus—yes, one was indeed a puppet) would predict that a large winter storm was bearing down on Maryland and likely to dump six to eight inches in Catonsville. Yes! Mike and I would dust off our Flexible Flyers, put our homework away, and beg our mom to stay up just a little bit longer. What the heck, we were going sleep in tomorrow anyway. Life was good.

And then…. during the night, the storm inevitably petered out as it hit the mountains of Western Maryland, temperatures rose, and it rained like crazy. No snow. No Flexible Flyer. Homework incomplete. An early wakeup call from mom and off to school where the nuns greeted us with a wry smile that said it was going to be a very long day. Oh, the indignity of it all.

I imagine that this is exactly how the Ex-Celebrity President and his MAGA Republican minions felt when they woke up on November 9th. The Red Wave turned out to be a Red Whimper. 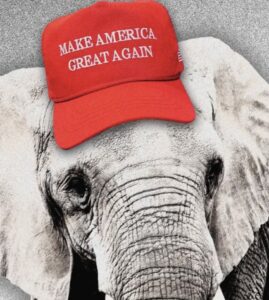 After barely winning the House, and allowing the Democrats to increase their margin in the Senate, surely a significant segment of the Republican Party would now come to its senses. Well, I’m not so sure. But before we examine that, how did so many (including yours truly) get it so so wrong?

There are enough theories floating around to fill up a novel the size of War and Peace, but the American people appeared to reject crazy (by very narrow margins), support democracy, and stand for decency. My Republican friends are never happy when I suggest that they have no vision. But let’s be clear: they have no vision. They don’t believe in anything. They know what they don’t like.  They dislike Democrats, don’t like health care, hate early voting, and twelve senators aside, aren’t crazy about the LGBTQ community. MAGA candidates suggested possible cuts to Social Security and Medicare, and the increasing color palate of the nation is not seen as a strength, but as a weakness.

They focus on things like Critical Race Theory, which of course is not a “thing” in our public schools. They like banning books, even the classics. Ronald Reagan’s “Shining City on a Hill” it is not. And of course, there’s the pièce de résistance: They learned from The Donald himself that if an election doesn’t go your way, it must be rigged. Just declare yourself a winner, and call it a day. They warm up to authoritarian leaders like Victor Orban in Hungary and his “illiberal democracy,” founding fathers be damned. But they do like a few things: they are very fond of guns, guns, and more guns. And they’ve never seen a tax cut for the wealthy that doesn’t make them all a twitter.

And then there was Paul Pelosi. You remember him. He’s the 82-year-old husband of the Speaker of the House Nancy Pelosi. He was brutally attacked with a hammer in his San Francisco home by a deranged man looking for the Speaker. The attack occurred just weeks before the election, and I suggest that the reaction of many Republicans, including those few still considered mainstream, was simply a bridge too far for many decent minded Americans. The attacks included crude jokes by crude elected officials before crowds of laughing acolytes who reveled in conspiracy theories, including that the attack itself was staged.  Basic human empathy for a very human story was nowhere to be found. The fact that Mr. Pelosi was a husband, a dad, and granddad didn’t compute. It just didn’t. In elections decided by razor thin margins, such blatant inhumanity might just still be repugnant to many of us. And that is a good thing.

So, while such rhetoric works for about 70% of the Republican base, it doesn’t play well in the burbs. But before we play that victory bell and declare Trumpism dead on arrival, keep in mind that 1.7 million voters in Georgia just voted for a candidate that would be unqualified to work at Dunkin’ Donuts much less the United States Senate. The MAGA team is far from dead.

If you need further proof, just look at how the right-wing-echo chamber reacted this week to a deal with the Russians that returned Brittney Griner to the United States. Prisoner swaps are never pretty. They inevitably involve us returning an unsavory character to another nation. In this case, the bounty for Griner’s return was Viktor Bout, a notorious arms dealer known as “The Merchant of Death.”  This is a bad guy.

But in the past, whenever an American returned home it was greeted by bi-partisan support regardless of the mess it took to make it happen. Many assumed that with the midterm elections still fresh on everyone’s mind, that even the MAGA team would hit the pause button on the divisive and hateful rhetoric that Americans seem to have rejected on November 8th. But that is simply not in their DNA.

Here are the facts: Brittney Griner was detained at a Russian airport for possessing vape cannabis oil and

imprisoned for 10 months. Ex-marine Paul Whelan has been detained on espionage charges (which the United States strongly denies) for nearly four years. Donald Trump did not mention Whelan once—you read that correctly, not once- during his four years in office. In fact, when he met with Vladimir Putin in 2019, he did not even bring up the topic. We continue to try and negotiate for the release of Whelan and others still held by the Russians. Very often our nation has no cards, so the decision becomes whether or not bringing home an American citizen is a good thing. Call me crazy, but my answer is a resounding yes.

Paul Whelan’s brother reacted this way: “The Biden administration made the right decision to bring Ms. Griner home, and to make the deal that was possible, rather than waiting for one that wasn’t going to happen. As the family member of a Russian hostage, I can literally only imagine the joy she will have, being reunited with her loved ones, and in time for the holidays. There is no greater success than for a wrongful detainee to be freed and for them to go home.”

So given the election and the reaction of the Whelan family one would assume that even MAGA Republicans would put partisanship aside and applaud Griner’s return. Ah, but the Christmas Miracle just wasn’t meant to be.

The leader of the band, Marjorie Taylor Greene, called for the impeachment of the President. Tucker Carlson’s head exploded, which is now a nightly occurrence on Fox News, and Kevin (I need 218 votes) McCarthy said the trade “has made us weaker, Putin stronger, and Americans more vulnerable.” And not to be left out, the Ex-Celebrity President, yes, the guy that never once mentioned Paul Whelan during his Presidency, weighed in: “The America hating basketball player for the “Merchant of Death,” especially when the former Marine is not even included, is a one-sided disaster, and a BIG WIN FOR RUSSIA. If I made that deal the Dems would chant, RUSSIA, RUSSIA, RUSSIA!”

By now, it is clear that the battle is far from over. The midterm elections provided some hope, but keep in mind that in many places “crazy” lost, but it only lost by a few votes. But in the spirit of the season, let’s go with hope over despair. We may chuckle at the happy endings, kindness, and community spirit on display in December on the Hallmark Channel every night at 8:00 P.M. Sure they’re hokey, and yes, each town square looks just like the town square from the night before. But maybe, just maybe, Americans yearn for a little old fashioned “we’re all in this together” moment. Be kind. Be decent. Be open minded. Comfort don’t judge. And demand that your elected officials do the same. Maybe a happy ending isn’t so bad after all.